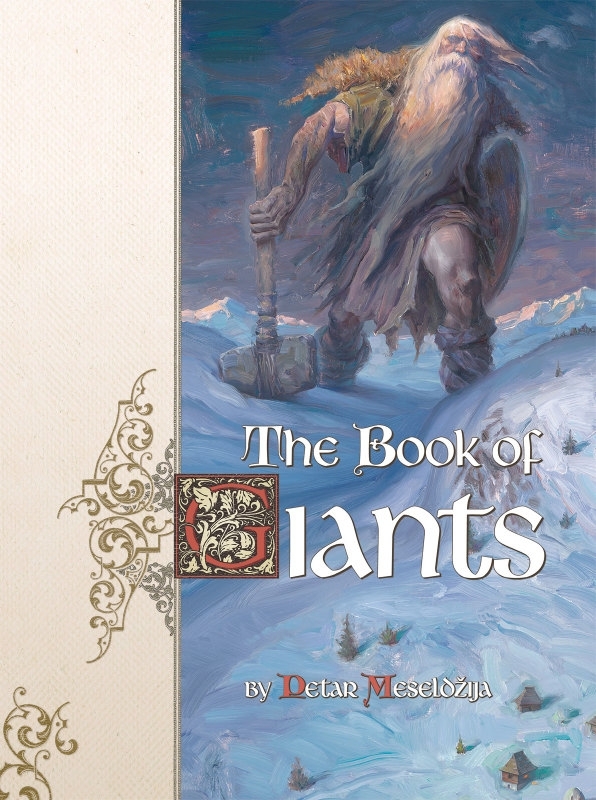 Book of giants by Petar Meseldžija

A revealing look at giants through a personal journey of discovery.

Take a journey with the artist and writer Petar Meseldzija, who tells how he was allowed unparalleled access through the Invisible Curtain and into the land of giants. A year in the making, this book’s sixteen paintings and nearly ninety drawings bring to life Petar’s experiences on this journey and secrets uncovered, going back to ancient times. He shares stories of new discoveries that free giants from the murky abyss of myth and a forgotten past.

Told in three stages, The Book of Giants includes the illustrated stories The Giants Are Coming, recounting a dynamic clash that lasted one hundred years; The Little Kingdom, where a giant befriends a nation of humans and becomes their adamant protector against ferocious invaders; The Northern Giants, who embrace the warrior spirit through countless battles; Giant Velles, the story of ignorance and how the strength of goodness perseveres; and The Great Forest, wherein the author discovers little creatures called the keppetz and relates his experiences spent with ogres while on his quest to meet the Golden One and to determine the purpose of his journey. Through the strength of his own power, he discovers his blessings, his limitations and finally his personal myth.

Furthermore, you will discover why giants made a push into the underground, followed by their exodus and deliverance to a new land. You’ll also learn why the myth of giants is still alive, why their time spent with humans remains elusive and why giants prefer to remain hidden in their world. Join Petar Meseldzija on his journey of discovery.